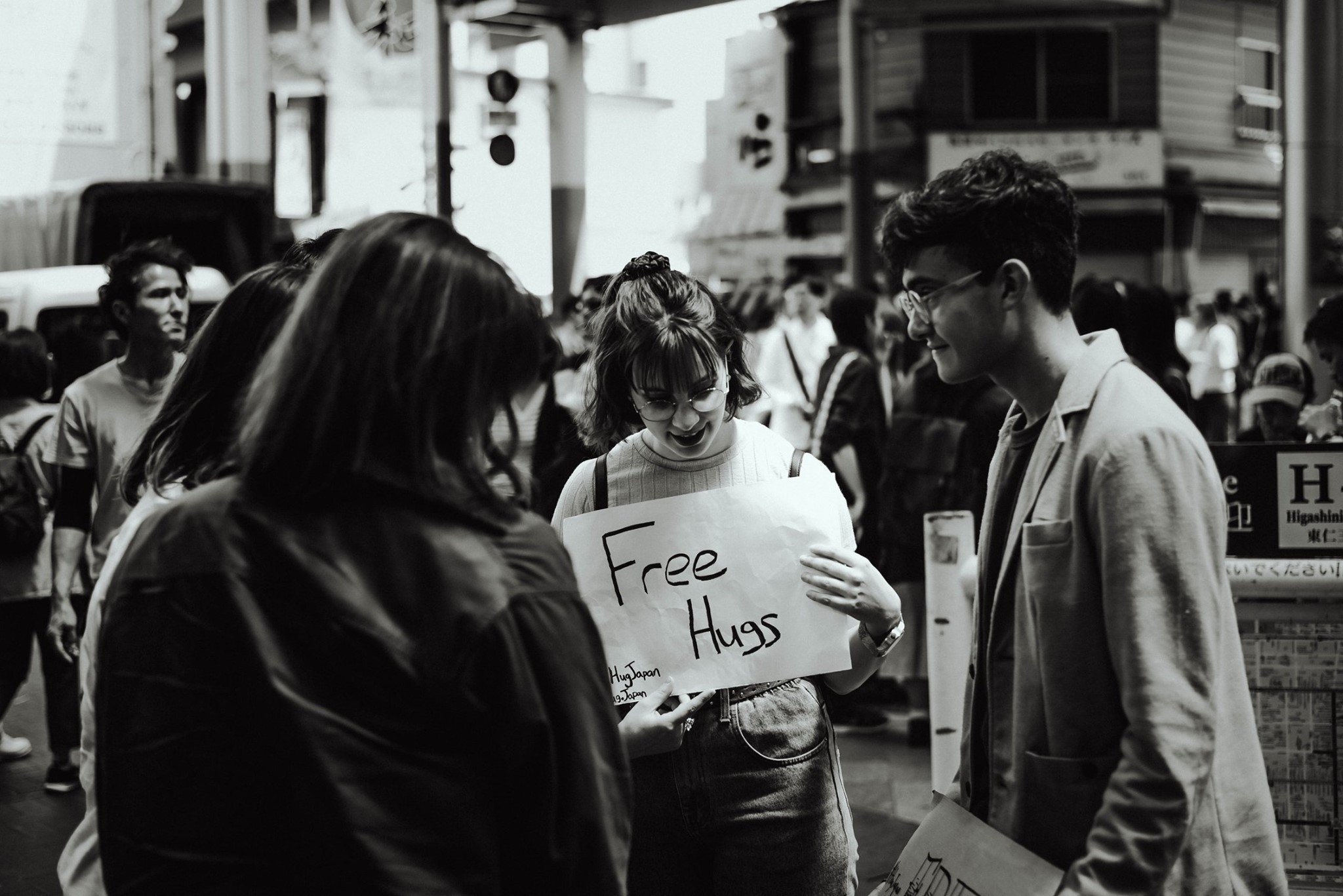 We Were Told People Don't Hug in Japan

We were told that people don’t hug in Japan; in a beautiful culture built on honor, people won’t make physical contact - as a measure of respect. I respect your space, you respect mine. Just one aspect of a perfect society where things work smoothly, and people are able to avoid feeling uncomfortable because they can always know what to expect.

The thing is, we’d just come from 3 months of generous community; loud dinner times, music always floating through the night, and constant, deep conversations. So there we were: an eclectic group of foreigners in Japan. Various nations, faces, and languages, just landed from the warm and romantic city of Mazatlán; a small, quirky family that laughs so much and tells their stories a little too loud!

We were told that people don’t hug; they don’t talk to strangers, or stop in the street, or easily talk about deep things. That evangelism would have to look different to what we’d experienced before. Being dropped into a culture of such contrast made us wonder. Walking the busy-but-silent streets and witnessing soft interactions made us wonder how in the world we were going to share this love that changes everything.

The day came for some ministry we wanted to do on the street. We decided to try something new, to hold up signs in a public place that stated truths of God.

‘You are loved.’ ‘You have purpose.’ ‘You are precious.’ ‘You’re created wonderfully.’ ‘Forgiven’… and only one unique sign unlike the others that read ‘FREE HUGS’.

We were trying to approach a society such as this in a posture of humility. We wanted to bring connection rather than confrontation. We had no idea how it would go but hoped that people would want to know WHY they’re loved, precious, and forgiven.

We stood in a nearby plaza awkwardly smiling. The vibes were really uncomfortable. We felt dumb. Holding our signs with a confidence we weren’t feeling, we smiled at the people walking past and about 10/10 people averted their gaze quicker than real eye contact could be made. We stood there and the environment felt tight. We dreamed of impact, but felt more like a public annoyance as we fought the discouragement none of us wanted to admit was rising.

Yet still we stood and prayed silently for God to move.

People didn’t want to talk about what we were presenting. Curiously, hugs started trickling in. Each one was a little awkward, usually accompanied with nervous laughter and curious onlookers. Yet each one was also accompanied with true joy, little flashes of color and laughter.

We turned all our signs over. Although they spoke truth, maybe they weren’t ready to hear those words yet. Maybe those truths didn’t have a foundation to stand on. Foreign truths from a foreign God, too confusing to understand from a language they don’t really know.

So we wrote ‘FREE HUGS’ on all the signs. People smiled small smiles as they passed. 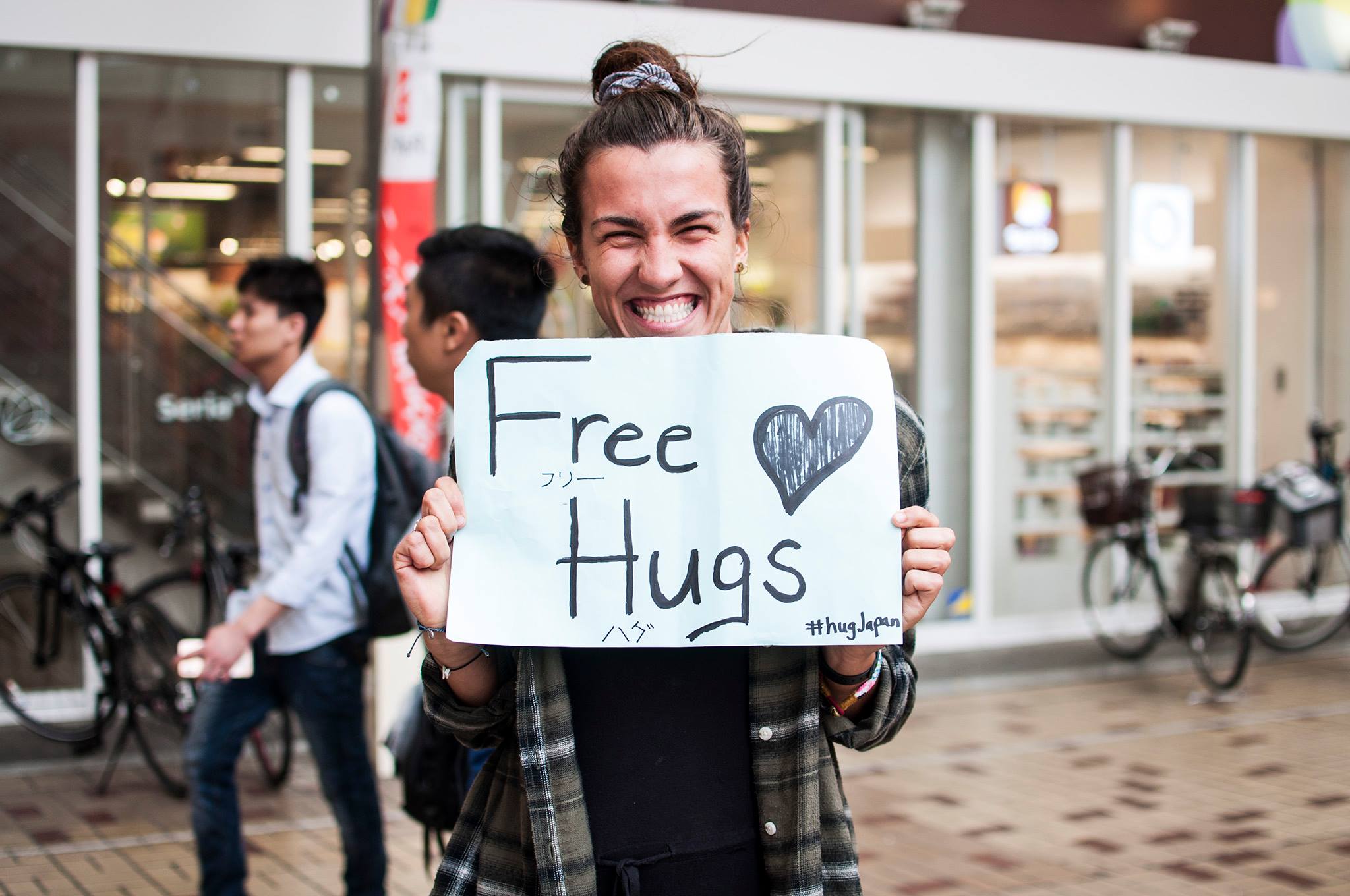 After a specifically robust hug, one of us said ‘You guys, something’s about change’.

A few minutes passed and we heard hurried steps and a shout of joy. A schoolgirl ran. She RAN to hug us. The air changed around us.

The rest of her friends wanted to hug us as well. The stream of hugs became steady as people felt the shift even if they didn’t realize what it was. The laughter was louder and the smiles so much warmer as they took in the strange sight before them and were encouraged to join in.

We asked names, speaking broken English and laughing at our own attempts at Japanese.

A friend with us had been in Japan for a whole year for missions. As we walked home he said something along the lines of “yeah I didn’t think anyone at all would hug you. Usually street evangelism here is like preaching at a closed door… but this felt like opening the door and saying ‘Hi’”.

We were told people don’t hug in Japan.

But we embraced so many people and each one felt like a miracle.

We did it the next time we had a free moment for evangelism, and we’re going to do it again and again because each time we’ve felt God moving.

What happens when we slightly push cultural boundaries for God’s glory? Not to force anything, but to simply offer an alternative? God transcends culture. His love moves between the mortar we build our walls with. That invisible bubble of personal space we surround ourselves with is nothing to him.

Less than 1% of people in Japan would call themselves Christians, and only around 5% have heard of Jesus’ name. Evangelism can feel hopeless because there’s almost no foundation for people to understand what we’re talking about.

And maybe one day they won’t say that people don’t hug in Japan.

Follow us on @hug.japan for more incredible stories of how God is moving in Japan!

Previous Story
← DTS is Over... Now What?
Next Story
I Blindly Said Yes and God Gave Me a Dream Come True →