If you’ve been around YWAM for any amount of time, you’ve likely heard about YWAM Ships. In that case, you probably know a thing or two about us. On the contrary, if you’ve never heard of us before, now at least you know we exist!

Whether you’re familiar with us or not, we’re willing to bet there are a few things you still don’t know about us.

For example, did you know we’ve been around for over 40 years? It’s true! YWAM has a deep history of maritime missions. For the last 4 decades, we’ve focused our outreach efforts on the coastal regions and remote islands of the world, otherwise known as “The Liquid Continent”.

That’s just one cool fact about our ministry. Want to know more? Read on for a list of things you probably didn’t know about YWAM Ships!

Did you know that over 11% of the world’s population lives on an island? That’s over 730 million people!

Many of these people can only be reached by boat. Without ships, they would be excluded from hearing the gospel preached in their own language and left without adequate medical care for their families.

Imagine you live on one of these secluded islands with a population of a few hundred people. Barely anyone ever visits your island. Then one day, a boat appears on the horizon heading straight for you. They make landfall and one of them announces that a man named Jesus sent them to deliver a message of hope.

For us? you think. Who is this “Jesus”, and why does he care about us on this little island?

For the next few weeks, you find out who Jesus is and just how much he cares about you, even on your tiny, remote island. The people on the boat—“missionaries”—provide medical care and help build stable homes. But most importantly, they preach the gospel message of salvation and distribute Bibles in your mother tongue.

This is what YWAM Ships does: Engage the isolated. God’s clear direction for us as Youth With A Mission is to reach the “all and the every”. That’s not complete until we include the most isolated people on the planet! 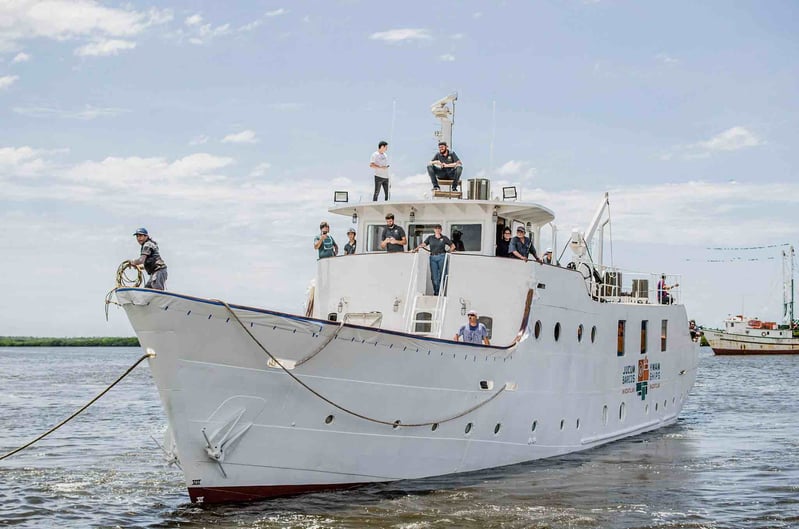 YWAM Ships used to have a different name

For the first 25 years that YWAM Ships existed, we went by the name “Mercy Ships”.

Mercy Ships was founded in 1978 and began with the commissioning of our first vessel, Anastasis. The Anastasis was the first of a handful of floating hospitals that would bring free medical care to the poor in the name of Jesus Christ.

For many years we operated hospital and relief ships, traveling the globe and porting in places like Central America, Africa, the Caribbean, and the South Pacific. Many people were reached by world-class surgeons and volunteers dedicated to express the love of Christ through mercy ministry.

In 2003, Mercy Ships became a standalone organization. Since then, YWAM has continued our ship ministry under our new name, YWAM Ships. We continue to do medical outreach, but we’ve also expanded to include a variety of vessels capable of transporting supplies, Bibles, and volunteers eager to share the gospel with the world’s most isolated people groups.

We have more than 26 vessels worldwide

One reason we call ourselves YWAM Ships, and not YWAM Ship, is because we have more than 1 vessel! We currently have over 26 maritime vessels across the globe that are working toward the vision of engaging the isolated. A big vision requires lots of ships!

Another thing you may not know is that we also have more than 1 operating location. Our ships deploy out of places like Hawaii and Australia and operate in countries like Panama, Papua New Guinea, and Mexico.

Not all our ships are the same

Not all our ships are equipped for the same purpose. The people we reach have a range of needs, and we do our best to respond accordingly.

Some of our vessels can haul cargo containers while our smallest ones can work up shallow rivers. We have ships outfitted to provide medical care, house volunteers, carry materials to build homes, and bring Bibles to be distributed in the local language.

YWAM Ships has a “twin”

In the mid-’70s, God told us that Youth With A Mission was to “give birth to twins”. When we asked him what that meant, he revealed that we were to start both a university and a ship ministry—at the same time!

God was clearly telling us that we needed to be intentional in reaching not just the continents of the world—as we’d been doing for the past 18 years—but the islands, too.

We were obedient, and God was faithful. In 1978, YWAM pioneered YWAM Ships and the University of the Nations (UofN). Since then both YWAM Ships and the UofN have worked closely together to carry out the vision and mission of YWAM: To know God and make him know. 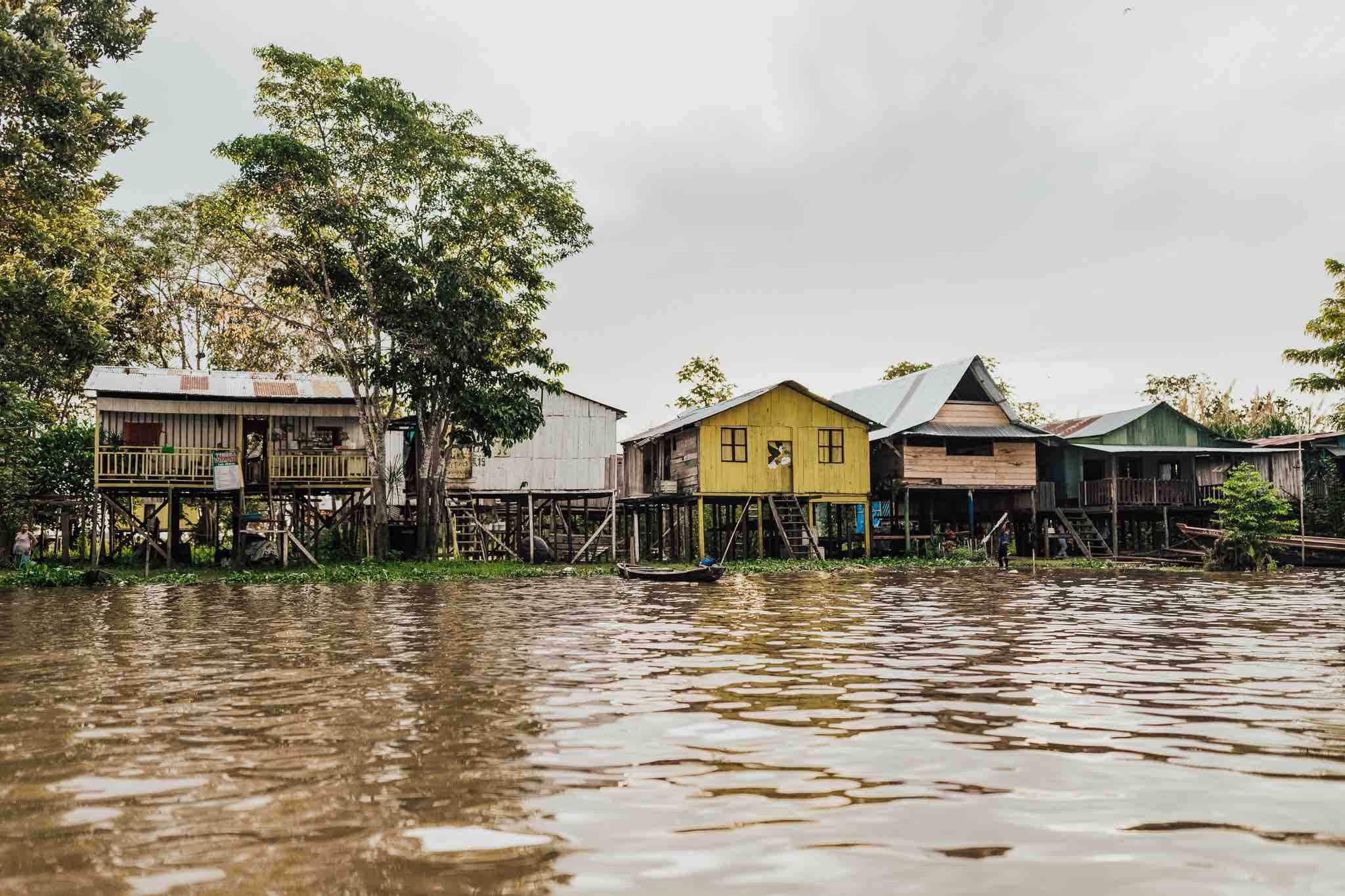 YWAM Ships is the mobile expression of our land-based campuses

YWAM Ships isn’t just another ministry of YWAM. Rather, it’s an innovative way to maximize the multiplication of our mission. Nearly everything we can do at one of our land-based campuses can be expressed on a ship.

For example, we can run Discipleship Training Schools (DTS) or other missionary training programs onboard. We can put Homes of Hope on a ship and deploy to isolated villages in Mexico. We could even set up floating YWAM campuses to serve ministries like Oral Bible Translation. There really are no limits.

But you know what the best part is? Some of the most hard-to-access people groups get to hear the gospel. They get to hear someone preach the love of Christ, revealing to them that God sees them, knows them, and loves them, even on their little isolated island. 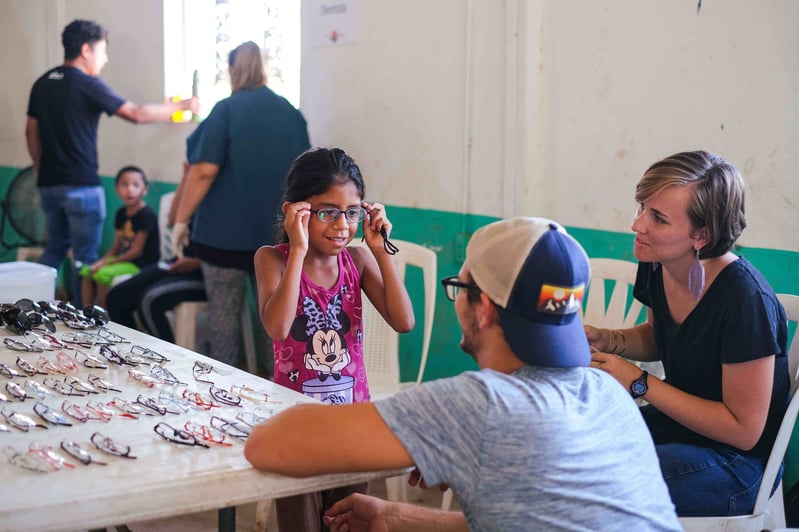 You don’t have to be a medical professional to volunteer

Lots of people mistakenly believe that in order to be a YWAM Ships volunteer, they must be a medical professional. While it’s true that we do receive medical volunteers, that’s not the only way you can volunteer with YWAM Ships.

Medical professionals can be anyone from doctors and nurses to dentists and optometrists, and everything in between.

General volunteers can serve as cooks, cleaners, and hospitality staff, or really fill any need that doesn’t require a professional license.

In case you were wondering, many YWAM ships are also capable of hosting YWAM outreach teams. This is an excellent way to continue strengthening the relationship between land and marine campuses in YWAM. 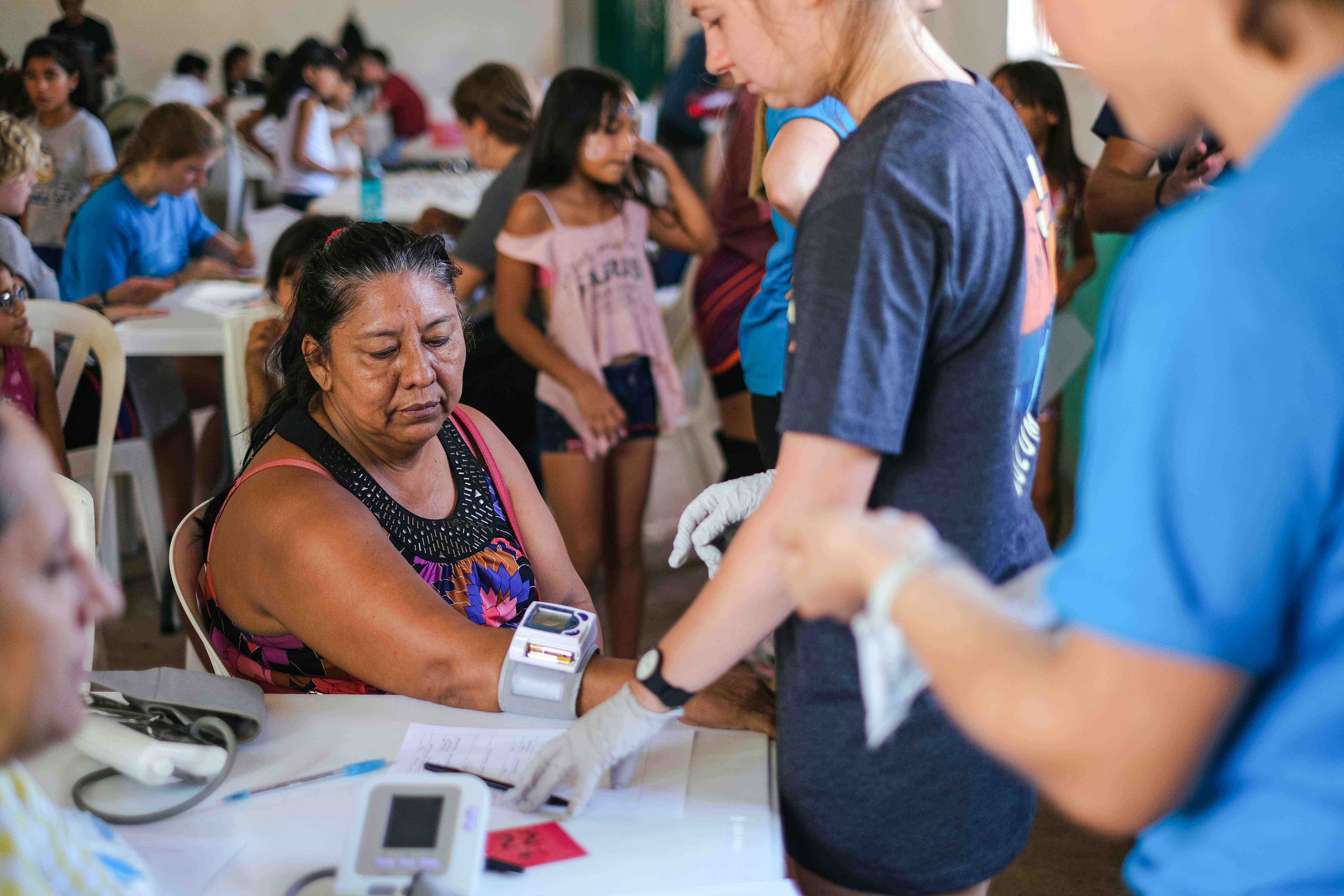 You don’t need a background in marine navigation to join

Maybe you’ve always felt a calling to do ministry aboard a ship but you’ve never even set foot on one. Can you still be part of YWAM Ships? The answer is yes!

While it definitely helps to know something about marine navigation, it’s not required to join YWAM Ships. We’re always looking for people with willing hearts to serve in any way that God calls them to.

Our marine crews will provide the necessary instructions for everyone on board. You don’t have to come with any experience, but you do need to come prepared to learn! Who knows? Maybe you’ll enjoy it so much you’ll stick around for a few years. 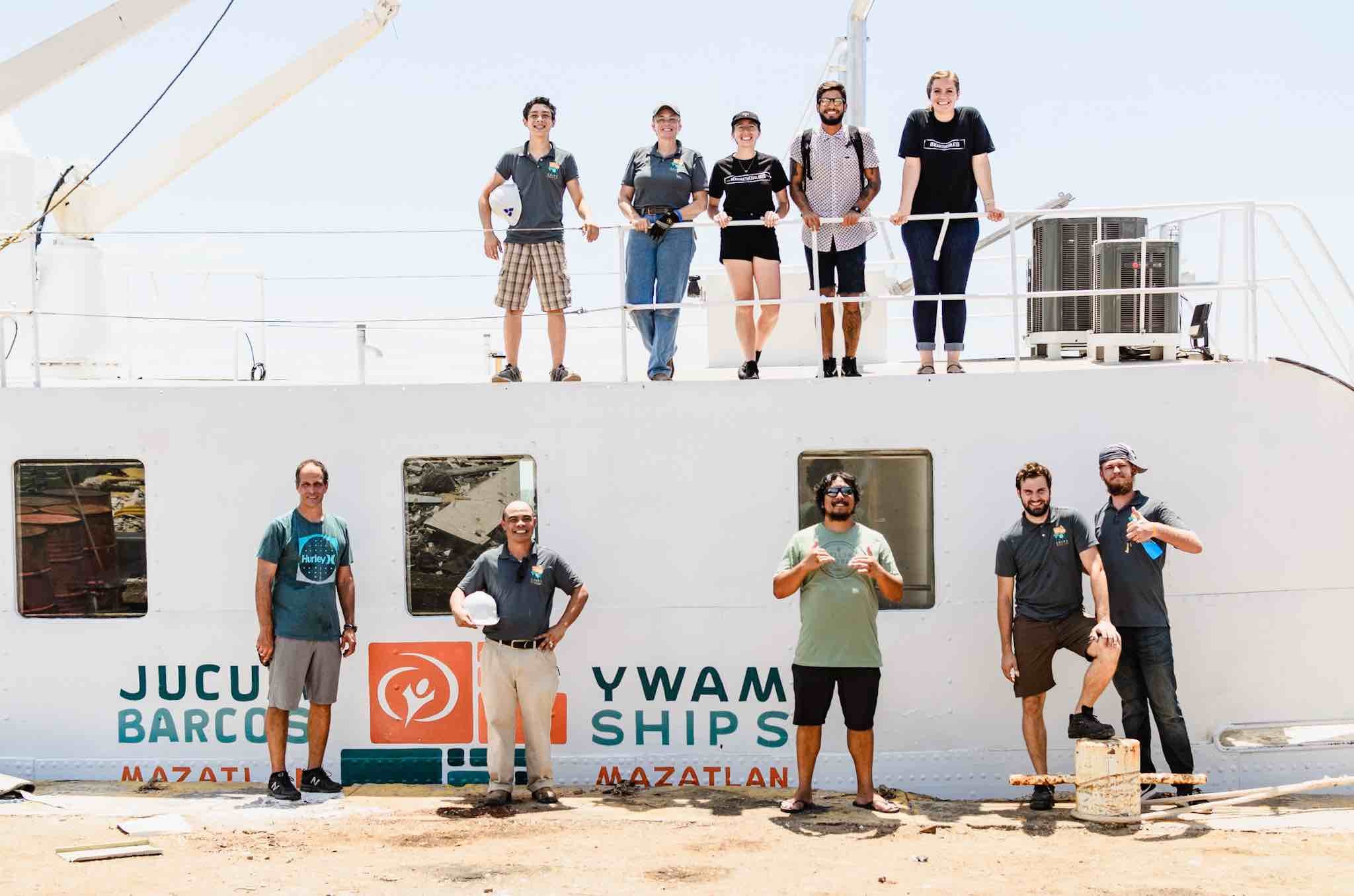 You could join YWAM Ships as a partnerSHIP

If you own a marine vessel, you could be eligible to join YWAM Ships as a partnerSHIP!

Our partnerSHIP program allows owners to use their vessels for missions through collaboration with YWAM. There are two options: you can operate your ship with logistical support from YWAM, or you can give the ministry use of your vessel for our outreaches.

Each partnerSHIP looks different, but they all have the same goal: reach more people for Jesus. 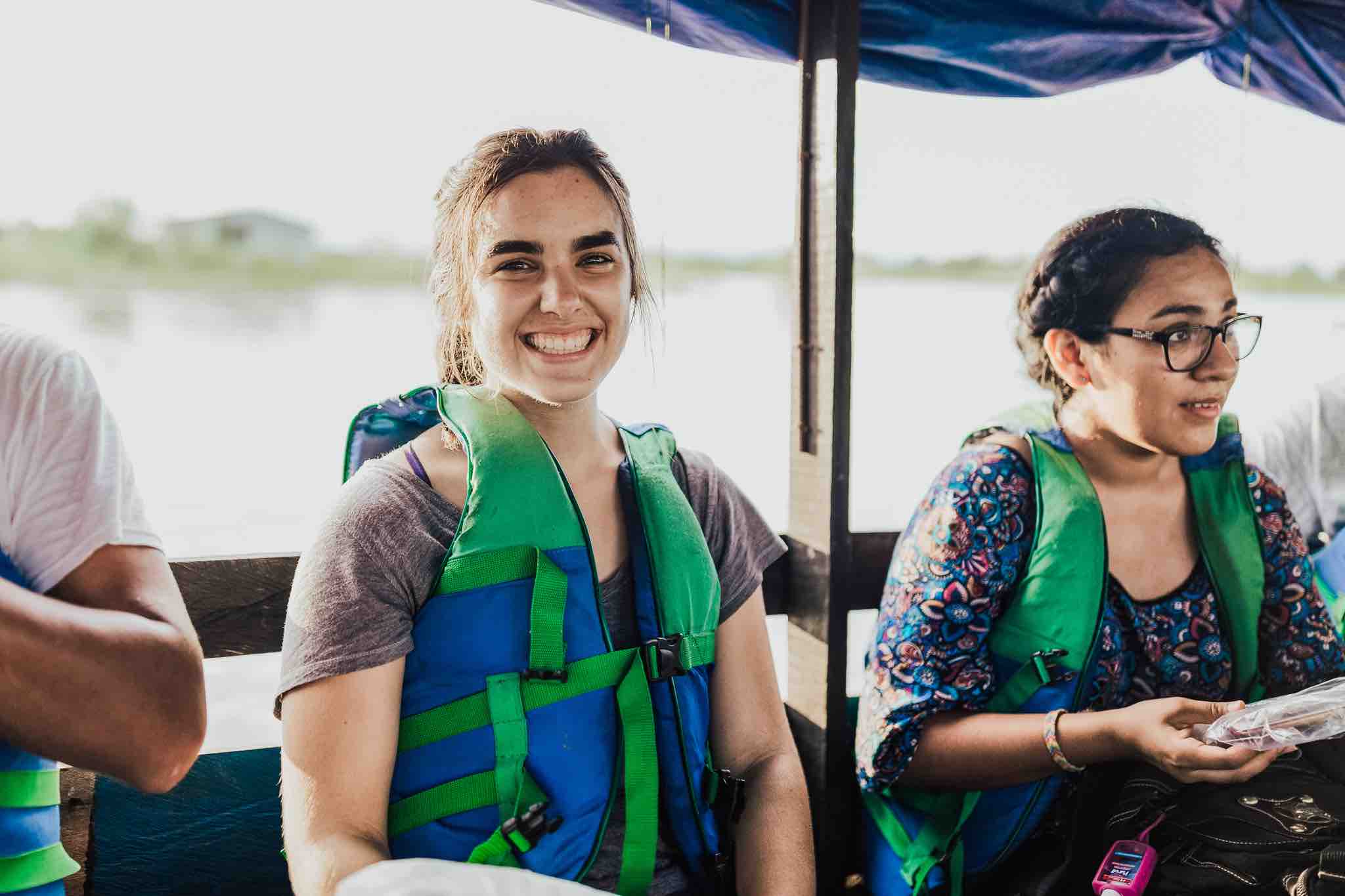 YWAM Ships is an incredible ministry that continues to impact lives every day. God has given us a clear vision. We consider ourselves privileged to minister to the most isolated people in the world. And, now that you know more about us, we’d love for you to join us!

YWAM Mazatlan is one of the many operating locations where you can get involved with YWAM Ships. Our vessel, the m/v Amazing Grace, is stationed in Mazatlan, Mexico, and is equipped to serve the islands and coastal regions of the Sea of Cortez.

If your heart is moved at the idea of reaching the most isolated, get in touch with us today and start your journey of helping us bring hope and healing in the name of Jesus.

These Stories on YWAM Ships

What You Need to Know About YWAM Ships Mazatlan