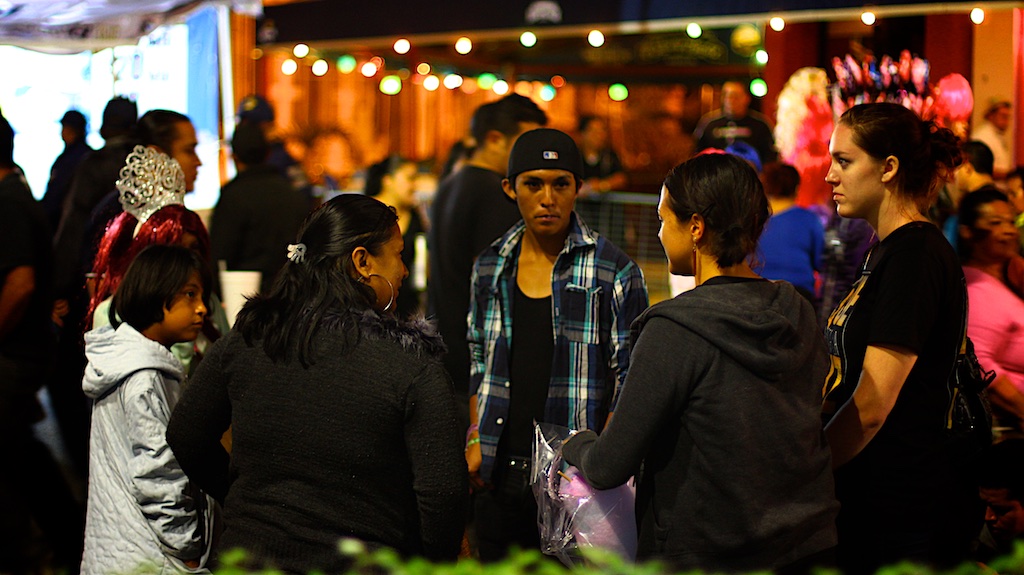 “The Spirit of the Sovereign Lord is upon me, because the Lord has anointed me to preach good news to the poor. He has sent me to bind up the brokenhearted, to proclaim freedom for the captives and release from darkness for the prisoners…” Isaiah 61:1 The words spoken by the prophet Isaiah, declaring what the mission of Jesus Christ would be when He physically entered into our world. These are also words that are on my heart and mind especially when I am in the darkest places.

A little over two months ago, I was with a group of incredible YWAM DTS students in San Salvador, El Salvador as part of the outreach phase of our July DTS. A huge part of the ministry at the YWAM base in El Salvador is reaching out to the men and women who prostitute themselves on the streets of the city at night. With a heart to see restoration in the lives of these precious people, the staff and students go out and share truth, hope, and love as well as an invitation to healthy relationships and friendships. Bind up the brokenhearted, proclaim freedom for the captives, release the prisoners from darkness. Restoration, because it's the passion of God's heart for His children. So we set out as a DTS one night to be a part of this ministry for the second time during our outreach. Seemingly the night was not in our favor. The rain pouring down, a bitter chill in the air, a little rushed to prepare for the night and seemingly disorganized. Our plan was to go out and invite the prostitutes to come to a night of fellowship at the base, complete with snacks, a guitar, and stories ready to share. We split up into two groups and headed out, hoping and praying we would return to the base with several new and old friends from the streets.

As we searched the dark rainy streets for our guests, the rain lightened up a bit. This is worth it, this is going to be worth it. The truth I kept repeating in my head. These guys and girls are worth it. Walking from corner to corner, we invited the prostitutes that we had met before and ones we had never seen, but everyone told us that they wouldn't be able to make it that night. Finally we found a group of four girls and one man as the rain began to fall heavier. We invited them to come back with us to the base, but they were hesitant. The rain picked up even more, as if trying to keep us from returning to the base. Our group and the little group we had come across hurried to a covered area and stood together, shivering. We were stuck. There was no way the girls were going to follow us back to the base in the torrential downpour. However, there was no way my team was going to let this moment go. We began talking with our new friends. I got to know two girls specifically and listened to their stories. One, an older lady named Elena, has four grown sons, and shared with me that she hasn't found another way of earning money to survive, so she comes out a few nights a week to earn a living. The other girl is Rut, and it was her first time on the streets as a prostitute that night. I could see the fear in her eyes, how much she didn’t want to be there doing what she had to do. She was telling me she didn’t have any other way to get money to feed her kids, and this was a sure way, but she knew it was dangerous and she wasn’t meant for that kind of life. As I listened to their stories, and glanced around to see the rest of the team talking with and praying for the other girls and the lone man with them, I realized something. Realized that we really working making an impact in that moment. God was ministering His love and His care right then and there. Starting a process of restoring hearts and proclaiming freedom and hope in a dark place. Even when I can't see the end result, God is always working, planting seeds of salvation in people's hearts and bringing light to the darkness. As it started to get late, we all stood together to pray before my group headed back to the base. Rut, Elena and the others told us how much our time with them meant. Told us that they were surprised, truly marked by just the fact that we would come to talk with them and pray. And I knew their words weren't just words. I could feel the honesty of what they said. I know they won’t forget that time standing under a little roof, with rain pouring all around…..with people who really love them because we have a God who really loves us and wants to break oppression and sin. I won't ever forget that moment, knowing that God is constantly using us to pour out His redemption on people and bring them to Him. God is moving and people have left those streets of San Salvador to begin a new life. I have that message welling inside of me-redemption- I just have to be willing to carry it.

Is that message heavy on your heart? What ways are you bringing God's message of restoration to a broken world? To the people around you? Can you imagine yourself being in a foreign place, with people who have a completely different story, people who have lived through incredibly hard things? You have the message that they need. One word from you that God puts on your heart can change someone's direction. It can jumpstart a cold or hurting heart. Bring light to the darkest places. It's something I've witnessed and experienced throughout my entire time here in YWAM Mazatlan, and in the different parts of the world that God has brought me to. It's powerful, and it's true. Continuing that passage in Isaiah, it says Jesus came to “proclaim the year of the Lord's favor and the day of vengeance of our God, to comfort those who grieve in Zion- to bestow on them a crown of beauty instead of ashes, the oil of gladness instead of mourning, and a garment of praise instead of a spirit of despair….” Isaiah 61:2-3 Wow. Are you willing to say yes and be a part of that?